In 1882, the 155-acre J. W. Bass Farm in St. Anthony Park was purchased to serve as the new site for the School of Agriculture and Experiment Station. This site was known as University Farm and is the present day St. Paul Campus. A farm house, large barn and farm were established. Edward D. Porter became the first Director of the Experiment Station. Several more people were appointed in the School of Agriculture.

The School of Agriculture was opened at University Farm in 1888. A 2-year practical course was offered, which included lectures and training in animal breeding, feeding, farm hygiene, and veterinary science. Seventeen students enrolled that first year. The second year, 76 students had already enrolled. The Experiment Station building burned down in 1890, but a new dairy building was erected on the same site.

Clinton DeWitt Smith was appointed Professor of Dairying in 1891. He increased the size of the dairy herd and brought Theophilus Levi Haecker to the School. T. L. Haecker became Professor of Dairy Husbandry. He later became known as the "father of Minnesota dairying" and the "father of cooperative creameries", as he was an evangelist of cooperation. Professor Haecker kept the most complete records imaginable on his feeding experiments. He developed the famous Haecker feeding standard, which electrified the dairy world when "Feeding the Dairy Herd" was published in 1913. It was the first feeding guide specifying the amount of energy and protein to feed a cow based on the cow’s weight, the amount of milk produced and butterfat percentage. A new dairy building was erected in 1923, and in 1925 was named after Professor Haecker.

In 1902, Professor Thomas Shaw resigned his position as Head of the Animal Husbandry Division in the School of Agriculture and Experiment Station. Andrew Boss, because of his successes as a Professor in the Division of Animal Husbandry, was appointed Acting Chief of the Division while retaining his position as Assistant Professor in Agronomy. Professor Boss became Chief of the Division of Animal Husbandry in 1905 and served in that role through 1909. Professor Boss felt that the quality, supply and variety of meat for the farming community would raise the standard of living. In 1894, he had offered the first course in dressing and curing meats in an agricultural school in the U.S. or Canada. This course was received so well that in 1901 a new meat laboratory was built. By 1905, there were four meats courses. Andrew Boss also was a strong promoter of the showing and judging of livestock at the International Livestock Exposition in Chicago. His many successes greatly increased interest in animal husbandry at the University of Minnesota. A cattle-breeding project with Milking Shorthorns was started. Professor Boss also planned and directed the building of the new Livestock Pavilion for the Animal Husbandry Division in 1904. For many years, this building was considered one of the outstanding animal husbandry facilities in the U.S. Andrew Boss became known as the "grand old man of Minnesota agriculture". The meat science laboratory was named the Andrew Boss Laboratory of Meat Science in 1977.

Clarence L. Cole became Head of the Department of Dairy Husbandry 1956. Cole was a pioneer in artificial breeding of dairy cattle. He performed the first artificial insemination in the country that led to a live calf. In 1966, Cole was named Head of the newly created Department of Animal Science, which included the former dairy, animal husbandry and poultry science departments. Also in 1966, Dairy Industries (established in 1959) became the nucleus of a new department, Food Science and Industries.

Cole was Head of the Department of Animal Science until 1968. He was succeeded by Professor William Hueg Jr. who served as Acting Department Head for one year. Robert W. Touchberry became head in 1970. Touchberry was perhaps best known for work on the effects of crossbreeding in dairy cattle, in which he studied the effects on production, health and herd life, as well production per lactation.

Dr. Richard Goodrich succeeded Touchberry as Department Head in 1983. Goodrich had joined the faculty in 1965 and was promoted to Professor in 1971. His expertise was in ruminant nutrition.

Donald E. Otterby became Head in 1994 until his retirement in 1997. Otterby had been on the faculty since 1963. He made many contributions to the dairy industry through his teaching and research activities. 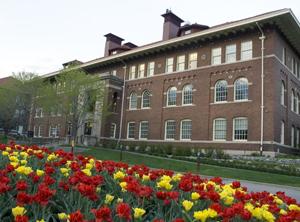 The swine and physiology groups moved from Peters Hall to the Veterinary Medicine/Animal Science building in 1993. The dairy group moved from Haecker Hall to Peters Hall in 1997 while Haecker Hall was being renovated. After renovation was completed in September of 1998, Haecker Hall became the home for the Department of Animal Science and now includes the administrative offices as well as dairy and poultry faculty, students, staff, and teaching and research facilities.

F. Abel Ponce de León, a leader in the field of structural and functional genomics and cellular reprogramming and animal transgenesis, held the Department Head position from July 1, 1997 to January 17, 2006. He then went on to serve as Associate Dean for Research and Graduate Programs in the College of Food, Agricultural and Natural Resource Sciences (CFANS).

James G. Linn, who had been on the faculty of the Department of Animal Science as an Extension Dairy Specialist for 28 years, served as Interim Department Head (February 2006 to June 2007). On June 11, 2007, he accepted the permanent Department Head position.

Michael E. White, a 20-year veteran of the Department of Animal Science in muscle biology and animal growth development, became Department Head in October of 2011 after Dr. Linn's retirement at the end of September that same year. White served 3 years as Department Head before accepting the position of Associate Dean of Academic Programs and Faculty Affairs in CFANS in November of 2014.

This history of the Department of Animal Science was originally compiled by Albert de Vries, Fall 1997.